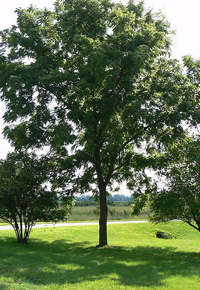 Walnut lumber may well be the most distinctive domestically sourced hardwood lumber on the market today. From its chocolate-colored heartwood to its easy workability, this wood is prized by craftsmen and designers, alike. Before America’s colonies united as a nation, her early settlers recognized the premium qualities of walnut lumber and began exporting it to Europe and Great Britain. For centuries, now, it’s been a popular choice for interior applications such as doors, trim, paneling, and furniture. Today, this unique wood continues to be popular both here and overseas.

Perhaps the most noticeable trait of walnut is its unusual coloring. When walnut lumber is freshly milled, its coloring ranges from light creams to dark purples and browns. In order to even out the coloring, many mills or lumber suppliers steam the wood. The more uniform chocolate-brown hue will eventually lighten to a shade that matches other domestic hardwood lumber species.

Because of walnut’s unique dark color, it has sometimes been compared to mahogany or cherry. For a time, it took a larger market share than mahogany, and its popularity currently rivals that of cherry, particularly in the furniture and flooring industries. The wood’s ability to be easily machined and gentleness on cutting edges combine with its appearance to make it a clear favorite for many.

The wood’s availability once made it far more economical than mahogany; however, in recent years, that has began to shift. There is no single, clear-cut reason for walnut’s cost increase; instead, it’s a combination of the tree’s growing seasons, size, and development. Unlike mahogany, many domestic species are limited in availability due to their less lengthy growing seasons. For that reason, the maple provides a more appropriate comparison. 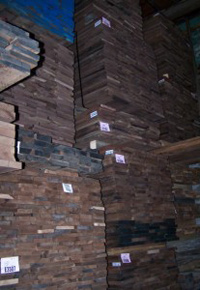 Because black walnut trees tend to have branches lower to the ground than many of their peers, knots and irregular graining is more common, as well. Combined with the lesser height, this issue has contributed to the downgrade of what is considered FAS walnut lumber. As a result, when a person compares an FAS maple or oak board to an FAS walnut board, the former may well be clearer and longer than the latter.

Even considering these issues, J. Gibson McIlvain maintains a great selection of FAS walnut lumber and even keeps 12-inch widths on hand. Sourced directly from mills in the nearby Ohio River Valley, the walnut McIlvain carries has been steamed and maintains a consistent coloring throughout.

Read more on the McIlvain blog: