The exotic hardwood called Sapele is sourced in Africa and finds uses as flooring, doors and window frames, cabinetry, and musical instruments. Related to both Mahogany and Utile, Sapele is less expensive than both of those related woods, while sharing many of their prized characteristics as well its own distinctive traits.

Sapele is harder than the mahoganies but still on the softer side for a hardwood. For sake of comparison, on the Janka hardness scale, it rates 1500, making it 20% harder than Mahogany and slightly harder than both Sugar Maples and Red Oaks. The hardness of a wood contributes to its durability, but since Sapele dries quickly, proper stacking techniques are necessary in order to avoid warping. Its responsiveness to sawing and sanding make it ideal for flooring applications. It also responds well to machine and hand tooling, as well as to nailing, gluing, finishing techniques.

For those working with Sapele, one caution is that its interlocking grain can cause tearing during the planing process. Another potential issue is that the fine dust can cause irritation to skin or respiratory difficulties due to inhalation.

Sapele seasons rapidly, causing its reddish-brown coloring to become darker and richer looking through the years. This seasoning makes Sapele aesthetically desirable, as does its unique graining. Sapele’s fine interlocking grain patterns change often, creating a striped effect, which can be enhanced through using quartersawn boards. (Quartersawn boards also boast more stability than other cuts of this wood.) The variegated ribbons of color showcase the seasoned hues. These unique aspects of the wood’s appearance make it a favorite for custom cabinetry and high-end furniture. Like Cedar, Sapele produces an attractive aroma that is repulsive to insects. 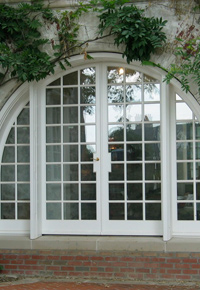 Sapele was used widely for decorative cabinetry in Europe, and particularly in Germany, even before the second World War. Once the war began, the wood’s remarkable strength made it ideal for Zeppelin propeller-blades. Since then, its typical uses have included window frames, custom doors, and flooring, as well as veneer for cabinets and book cases.

The tonal profile of Sapele mimics that of mahogany, but its appearance is distinct. For an interest-evoking guitar back, some high-end guitar companies use Sapele instead. Other instruments that use Sapele include folk guitars and ukuleles. Some percussion instrument manufacturers have begun to rely on Sapele for the strong, lively sound that it produces.

One niche application of Sapele is by auto manufacturer Cadillac, which includes Sapele wood accents in some of its luxury car models.

Because of Sapele’s strength and aesthetic appeal, it is a budget-friendly substitute for some of the more expensive exotic hardwoods. If you’ve been using Utile or Mahogany, be sure to ask the lumber specialists at J. Gibson McIlvain (click here) about whether substituting Sapele would work for your projects.