In Part 1 of this series, we looked at three main influences on wood grain, which is the main contributing factor when it comes to wood color, bar none. In summary, density variation, seasonal shifts, and sawing techniques all contribute to the face grain of a board, which, in turn, determines its apparent color. In this installment, we’ll consider how harsh environmental elements can make a difference, too, on how your lumber looks.

The Initial Impact of the Elements

Rain, wind, and good, old-fashioned sunshine combine to drastically change the color of a board, once it is milled. Over time, unfinished lumber of almost any species will eventually fade into a silvery gray color; however, that transformation occurs quite slowly. In the meantime, color can change randomly based on the board’s exposure to the elements.

As you might expect, a freshly milled board will display the most drastic color change. The two main reasons for this shift is that the freshly milled surface undergoes major changes as the board begins to dump additional moisture and chemical shifts occur.

The Eventual Blending of Colors

Even in species of special interest like Teak, in which the initial color change can be fairly extreme, the color differences become more subtle over time. You can speed up the process prior to installation by laying boards out in the sun, allowing the elements to affect all surfaces. If you choose to go that route, though, keep in mind that wood can display “tan lines” just like people do, so make sure the boards are clean and free from debris.

The Significance of Regional Climate Distinctions 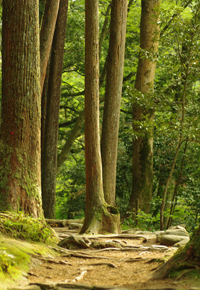 Once we get beyond comparing multiple boards milled from a single tree, the range of colors within a single species become markedly more significant. Certain species such as Cumaru and Ipe have vast growing areas that include multiple climates and types of soil chemistry. From streaking caused by mineral content in the soil to shifts in soil chemistry due to fires and floods, with dark streaks on either side of significant weather events, the environment in which a tree grows can greatly impact its color.

The Results of Difficult Traveling Conditions

Any tropical decking species — but especially African hardwoods — endure quite the tumultuous trip from when the trees are first harvested to when the milled boards arrive on U.S. soil. After many lengthy and uncertain layovers, bumpy rides on muddy roads and through war-torn territories, and then being confined to a sweaty shipping container as it carries them overseas, the boards endure quite the punishing trip.

Stained with mud, mold, water and other accumulated battle wounds, the boards are then moved around by fork lifts before being moved to the lumber yard from which they’ll be purchased. After a good bath, though, much of the baked-on “junk” accumulated during travel will come off, revealing a color that may be far different than your first impression.

What should you do about the apparently impossible goal of finding color-matched lumber? Read Part 3 for our suggestions.