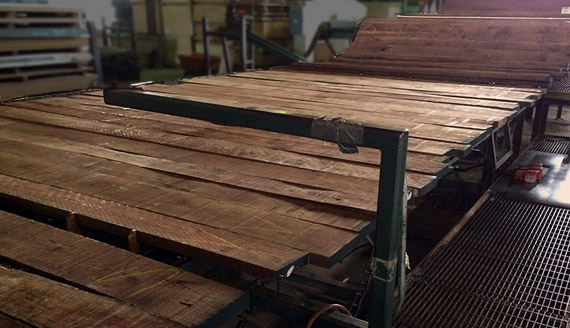 Particularly with design trends relying on extreme colors — extreme lights and extreme darks — American Black Walnut is renewing its place as a favored domestic species. No other North American lumber species can boast the same chocolate-colored heartwood, and even exotic species lack the same unusual beauty that Walnut displays. Since before the United States was even a nation, its Walnut lumber has been exported to other shores, where its remarkable beauty has gained popularity for interior woodwork and furniture applications for centuries. While more plentiful back then, today’s Walnut is still highly prized, and for good reason.

The Black Walnut tree grows across much of North America in many of the same areas where Maple trees grow. The larger, heartier Maple trees are more aggressive, however, and they often starve out nearby Walnut trees. Since Walnut trees demand much light and struggle when subjected to wind, they can often be found surrounded by Maples or other aggressive species, causing them to remain on the shorter side (usually only 30-70 feet tall). Because of their smaller size, Walnuts typically have many branches, often causing the grain to become twisted. The sap layer can be quite large, and the color variation between the sapwood and heartwood can be extreme; for that reason, Walnut lumber is often steamed to reduce the amount of contrast. With oxidation and UV exposure, untreated Walnut typically lightens, blending with other species.

Walnut grading is a big issue these days. The grading systems in place simply aren’t effective in categorizing Walnut. You can read about exactly how different the standards for Walnut are, but the basic idea is that the shorter boards and greater number of “defects” are accounted for. While downgrading lumber can generally be considered negative, when it comes to Walnut it actually makes sense. Since the purpose of a grading system is to help buyers differentiate between levels of quality, having fewer levels with which to work would make the system less effective. Using traditional grading category specifications, the FAS category would be virtually pointless for Walnut. All things considered, we are able to offer above-grade boards; at the same time, those boards will be quite different than above-grade Cherry or Maple.

Walnut is in high demand for use in cabinetry, furniture, flooring, and other interior woodwork. Today, it even rivals Cherry for popularity. It’s easy on cutting edges yet machines easily due to its mid-range hardness; at the same time, it holds details well and finishes beautifully. Growing demand for Walnut within the boat-building industry requires value engineering, due to Walnut’s very different availability, compared with that of Teak.

Because many people still perceive the quality of Walnut to be low, its high price tag seems to cause frustration. Some, aghast that it can be more expensive than Genuine Mahogany, fail to realize the natural limitations that plague Black Walnut. J. Gibson McIlvain continues to source above-grade Walnut lumber, beautifully steamed to provide our customers with consistent coloring that’s as good as it gets!

Continue Reading About the Wood Industry

• The Secrets to Installing Wide Plank Flooring
• What Lumber Customers Need To Know: What’s With the Fractions?