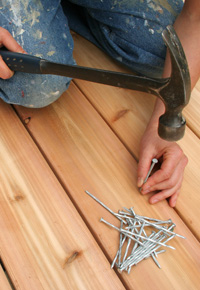 When it comes to the gaps between boards in a new deck, customers often have a definite opinion. They might tell you they want no gap, a ¼-inch gap, or another specific idea of exactly what they want. The problem is that regardless of the amount of gap at the time of installation, that particular size of gap will only be that way for a small portion of the year. As an organic material that responds to the environment around it, wood expands and contracts with seasonal shifts in humidity.

As uncomfortable as it may be to install a deck in the heat of summer (when most deck building takes place), the good news is that your lumber is at one end of the movement spectrum and will only move in one direction. For much of the country, high humidity accompanies the higher temperatures; that humidity causes the wood fibers to swell with moisture, expanding the board width to the widest it will be.

The most popular (and highest quality) species of exotic decking lumber is Ipe, so we’ll look at its properties as an example of how much movement you can expect. A typical Ipe decking board is 1-by-6 inches. If the temperature is 96 degrees, and we’re at 90% humidity, it will retain its width throughout the hot summer months but will shrink as the temperature and humidity become lower in the fall. Let’s say the board is 5.5 inches wide. By October, we may be seeing temps around 65 degrees, with 50% humidity. That 5.5-inch board will have shrunk approximately 3/16 of an inch, making the once ¼-inch gap closer to a ½-inch wide. Now, let’s consider that same deck in the dead of winter, when the temperature is closer to 25 degrees and humidity is around 25%, causing the decking to shrink an additional 1/8 inch or so, making the gap swell to 5/8 of an inch. As you might imagine, your customer who was once happy with the ¼-inch gaps would be a bit frustrated with the situation. 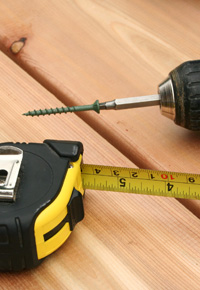 Worse than larger-than-expected gaps, of course, would be buckling and cracking boards. Let’s say you followed that same request for ¼-inch gaps between boards, but you installed the deck in the dead of winter (unlikely, I know, but just go with it, for now). By summertime, those boards would have expanded by more than 1/4 of an inch, resulting in serious damage, compromising the integrity of the individual boards and the deck as a whole.

The amount of movement depends on even more than the species and size of the board, but also on the precise cut. Lumber cut from closer to the center of the log will respond to climate changes differently than boards cut from the perimeter. Since wood is anisotropic, it moves differently in each direction, making quartersawn boards move much less across the width than flatsawn boards (as used in our example above).

In part 2, we’ll give some specific recommendations for lumber spacing.

From the McIlvain blog: