In addition to hardness, stiffness, and weight (see Part 1), there are a few more categories useful in comparing Jatoba and Ipe. While both are excellent choices of tropical decking species, Ipe is, by far, the favored one. As Ipe becomes increasingly difficult to source, some builders and customers alike are finding Jatoba to be a suitable Ipe alternative. Others are even finding it preferable to the long-time favorite.

Building around the predictable, anisotropic movement of wood can go a long way toward alleviating the potential problems that can stem from this down side of utilizing natural building materials. Because wood fibers basically act like a bundle of straws that suck up moisture, the tangential movement (parallel to growth rings) is typically more significant than radial movement (perpendicular to growth rings).

However, more significant than the movement ratios is the varying moisture contents on each face of a board: For instance, one face may be subject to rain and sun, while the opposite is continually shaded. This kind of inequality can cause cupping. Because of its lower density (and more empty space between cells), Jatoba actually tends to exhibit less cupping than Ipe. Either species will fare well, though, as long as installation is performed properly, allowing for adequate spacing between boards and ventilation beneath the deck. 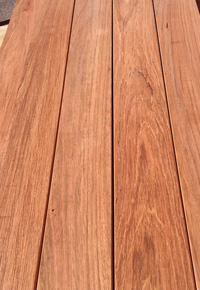 Considering the relevant technical attributes of both species, we’ll call it a draw between Jatoba and Ipe. In an ideal world, things like availability and cost would be insignificant; however, we all know that this world is far from ideal. Jatoba usually costs only 2/3 as much as Ipe and is much more easily available than the long-time decking favorite. The shortage of Ipe promises to continue to escalate, making the prized species more and more difficult to secure.

Even though Jatoba is fairly new as a decking species, its popularity for interior flooring means that its supply pipelines are already in place. In addition, Jatoba offers the unique ability to blend inside and outside spaces with similar flooring. In Ipe’s favor, Jatoba is currently available in a small number of sizes, making building a deck in only that species an impossibility. (Currently, only 5/4×6 decking boards are available.)

At the end of the day, either Jatoba or Ipe is a great choice for your new deck. Whichever one you choose, we’re confident that you won’t be disappointed.

Jatoba is quickly rising to the top as an Ipe alternative for decking. While Ipe is still available, despite shortages, we think it’s important for customers to be able to make an informed decision about whether Jatoba would meet the needs of individual projects. Since the characteristics of Ipe are well known, we’d like to compare the two, side by side, to aid in your evaluation. We’ll start with technicalities.

The hardness of a board is determined by the Janka test, when a steel ball that’s approximately 1/2″ in diameter is pushed into the face grain of the board, to the extent that approximately ½ its diameter is embedded in the wood. The rating you see listed in wood charts is the measurement of the force required. Ipe ranks at 3684 pounds-force (lbf), while Jatoba is at 2690. Clearly, Ipe is significantly harder than Jatoba.

The question we have to ask, then, is whether the relative hardness of Jatoba presents a practical problem for your deck. The answer is no. Jatoba is still much harder than other commonly used decking species, such as Pressure-Treated Pine, which rates 690 on the Janka scale, or Western Red Cedar, which rates only 330.

In some cases, you really want a material that demonstrates flexibility and elasticity — but your deck is not one of those situations. The MOE, or Modulus of Elasticity, is measured in pounds per square inch. It describes how much a board will flex under foot traffic between joists. As you might guess, the numbers help determine optimal spacing for the supporting structures. At 3129, Ipe again beats out Jatoba, which comes in at 2745.

But if you understand that most Ipe decks and boardwalks are overbuilt, anyway, you realize that while Ipe could safely be installed on 24” centers, with no fear of bounce, the 12-16” spacing that’s become standard will present no issues for Jatoba. So again, the fact that Jatoba is approximately 15% less stiff than Ipe falls short of making it a poor choice for your deck — unless you’re expecting an entire herd of elephants at your next backyard barbecue.

The weight difference between the two species is far from significant, with Ipe weighing 62 pounds per cubic foot and Jatoba, 57. The relative loads need to be taken into consideration during the installation process, but as long as the construction takes them into account, neither is a problem. It’s actually more of an issue to consider during shipping: Just imagine how much lighter an order of Jatoba will be compared to Ipe! Those 5 pounds can really make a difference, considering an entire project. Since shipment costs typically correspond to weight, you’ll save money by choosing Jatoba over Ipe.

In Part 2, we’ll look at a few more categories of comparison between these two excellent tropical decking species.