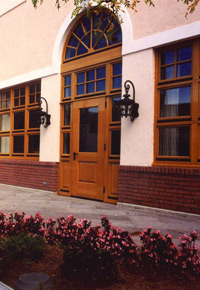 And the differences between Genuine Mahogany and African Mahogany don’t end there. African Mahogany, as a result of its straight, interlocking grain, is also hard – about fifty percent harder than most Mahoganies. This variegated grain pattern also results in some appearance differences in the form of alternating bands of light and dark color in the finished lumber.

African Mahogany is also a very flexible wood in terms of the types of appearances it is capable of taking on. Its natural characteristics make the wood absolutely beautiful under a clear coat or stain, but the lumber’s grain also takes paint very well.

This flexibility in appearance possibilities, as well as the wood’s other positive characteristics, such as its coloration and stability, increases with the quality of the wood, so purchasing African Mahogany from a high quality lumber dealer is definitely a worthwhile investment. J. Gibson McIlvain, a centuries-old wholesaler of high quality lumber carries only the best African Mahogany boards, and their selection of this lumber holds its own not only by being a great alternative to Genuine Mahogany, but also by being a fantastic wood in standalone terms.